Posted on February 3, 2017 by bastethebook 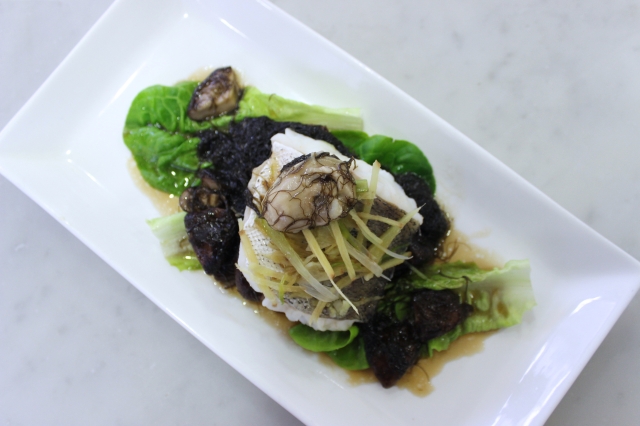 The Chinese love puns. No more so than on New Year’s, where almost all our dishes involve a pun of some sort. For instance, nian gao 年糕means New Year’s Cake, but gao 高 is also the word that means “to elevate” which means that you will rise in the New Year. Also nian (粘) means sticky, and a nian gao cake is super sticky indeed. Steamed fish with hosee fat choy (oysters and black moss) — is a Chinese New Years dish packed with puns.

First let’s start with the fish, a fixture on almost every Chinese New Year table, and served at the end of the meal. The word for fish, yu 魚, is a pun for yu 余, or surplus. As the Chinese saying goes, Nian nian you yu 年年有余, which means “May you have a surplus each and every year.” Mind you, a belief in surplus isn’t exclusively Chinese. Charles Dickens has Mr. Micawber in David Copperfield explain. ‘Annual income twenty pounds, annual expenditure nineteen [pounds] nineteen [shillings] and six [pence], result happiness. Annual income twenty pounds, annual expenditure twenty pounds ought and six, result misery.” In other words, as Mr. Micawber and the Chinese point out, start your year with even just a few cents leftover from the year before in your pocket.

Oysters, like many other seafoods, are crucial in Chinese cuisine. The Chinese for “dried oyster” 蠔士 is pronounced hao shi, which sounds like hao shi 好事which means “good things.” Also, the Chinese love their oysters. Oysters embody xian 鮮, the Chinese equivalent of umami, as their favourite flavor, and oysters are one of xian’s most luxuriant conduits. For some lay Buddhists, oysters are considered a vegetable for when they have to do their ritual vegetarian fasts. For the rest of the Chinese, a celebration would be nothing without this salty, gorgeous bivalve.

Fat Choy or fa cai (Black Moss) grows on the steppes of the Gobi Desert in Mongolia and the Qinghai plateau in Tibet. Literally translated, Fat choy (Mandarin fa cai), 髮菜 means hair-vegetable, but it is also the pun for the Cantonese phrase “fat choy” (發財) for good luck. It is prized in Buddhist cuisine. It is butter soft and silky, the inky vermicelli of vegetable world. Some of the most luxurious Chinese ingredients are about texture rather than taste, and fat choy is a good example of this, because it picks up the flavours of whatever it has been cooked with, but has its own unique, velvety mouthfeel. Fat choy is increasingly rare and expensive, because over-harvesting has been damaging the desert steppes where fat choy grows, and many Chinese purveyors are adulterating their fat choy. If you want real fat choy, look for the stuff that is extremely dark green in colour, rather than black, which will mean that it is probably fake. Ironically, even though it grows far in the North, it is an almost exclusively consumed by the Cantonese in the South, where every New Year, they grace their tables with the stuff and wish each other “Gong hey fat choy.”

Kwanghi Chan has given his Ho See Fat Choy steamed fish a fresh, Irish-continental twist. He replaces the pungent dried oysters with Irish oysters, plump, freshly pried from the shell, and lightly poached. Hake is one of the sweetest fish in the Irish waters, and letting it sit briefly in a French-style brine give the fish just a bit more body and flavour. My mother who dislikes both dried oysters and black moss and its place in the Chinese New Year’s table (Cantonese tastes, she will mutter) said – “Oh. Kwanghi’s version sounds delicious!”

Although Kwanghi uses filet rather than the whole fish that is traditional, but you can of course substitute whole sole, turbot, flounder, or even red snapper or sea bass. If you go the whole-fish route, it is important for the person who sits nearest to the head of the fish to commence eating. Usually this person is either the guest of honor or the eldest, and it is for them that the best bits – the fish cheeks (which Mei loves) and the fish eyes (of which she’s not too fond) — are reserved. They also need to know how to serve the fish properly, for flipping your fish at a Chinese table is bad luck. Therefore, it is the responsibility of the person sitting next to the head of the fish to remove the skeleton of the fish after everyone has finished eating the first side.

For brining the fish:

For the hosee fat choy:

Optional: 1 tbsp of chicken fat, rendered from a four-inch piece of chicken skin.

1. Brine the fillet of hake in cold water, salt, sugar for 20 minutes, and drain on a kitchen towel. Set aside. Soak the black moss in cold water for 15 minutes. Swish it around a bit to loosen any dirt or particles. Remove the moss by hand and discard the water. Repeat the process once more before transferring the moss to a colander to drain.

2.  Rinse the shitake mushrooms, and squeeze them gently to remove excess water. Cut off the stems and discard. Slice thinly.

3. If using the chicken fat, render the skin in a pot over medium heat until the fat/skin is a little crispy. If not using the chicken fat, heat the pot over medium high heat. Add 1 tablespoon of canola oil, the teaspoon of chicken base, the smashed ginger slices and scallion whites, and brown them until caramelized (about 1 minute). Add the mushrooms, and stir fry for another minute.

4. Add the Shaoxing wine and, after a quick stir, add the chicken stock, sugar, soy sauce, and oyster sauce. Stir everything together. Next, add the fat choy and gently stir it in without breaking it up, so it’s submerged in the liquid. Cover, reduce the heat to medium low, and let simmer for 20 minutes.

5. While you wait, prepare your steamer. Fill a large wok or large pot a quarter-way with water and bring the water to simmer. With parchment paper, line a steamer big enough to fit the six fillets or, alternatively prepare two steamers. Place your fillets in the steamer, cover, and steam for 5-7 minutes, until the fish is opaque and flakes away easily.

6. To the black moss and mushrooms, add the oysters and poach for three minutes, just until barely cooked.

7.  Traditionally the Chinese serve family style, which would mean all the portions of the fish on one plate. If you wish to do this, line a large deep serving plate with hand-torn romaine or iceberg lettuce. Alternatively, divide the lettuce between six plates.

8. Uncover pot and with a slotted spoon, plate the moss, oysters, and mushrooms on the top of the lettuce. Allow for three oysters per portion of fish. Place the fish atop the mushrooms, moss, and oysters. Increase the heat to reduce the sauce until most of the standing liquid is no longer visible. Stir in the green portion of the scallions, and spoon the mixture over the top. Try to place the oysters and mushrooms on the top where they are visible and serve hot!

This entry was posted in Essays. Bookmark the permalink.